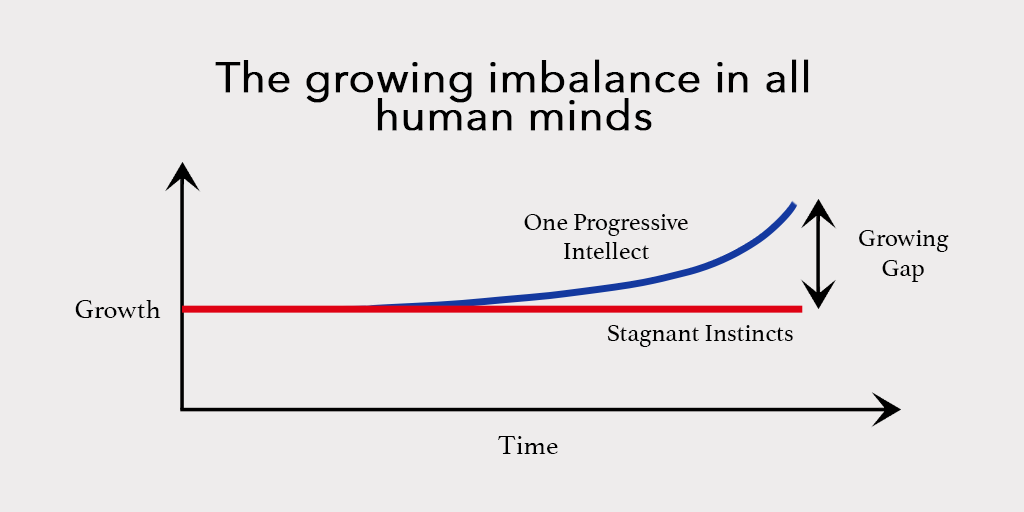 THE GROWING IMBALANCES IN THE HUMAN MIND

1-The Mechanism of the Mind: To understand humans we must identify the mental forces that drive them and understand how they interact. Our species is known for its intellect, but the human mind consists of not a single pole of intellect, but it is bipolar and consists of the two forces of instincts and intellect. Yet, the role of instincts in human conduct is largely ignored. Each of these mental forces has distinct mission of its own and recognizing this is elemental for understanding humanity at large. The maternal instinct and the instincts of sexuality and aggression are universally known and accepted, while this study introduces 13 more, each of which induces its own brand of conduct. Instincts by nature are unchanging, stagnant and primitive. In a sharp contrast, however, intellect relentlessly grows and enhances itself. Also, instinct as the sole force that governs the world of lower beings is the essence of being animal, while intellect being unique to humans is the essence of being human. The contrasting natures of the progressing intellect and stagnant instincts result in a growing divide that widens with the progression of time. The implications of this growing divide in human mind are truly profound.